This summer, I hosted a summer program in my home for neighborhood children. It was quite an experience for all! There aren't any French-speaking families in my area, so I wanted to encourage my children to use the French they know in a fun context. I also wanted them to see that other people in the community value language learning. This camp really did the job! The other goals of the camp were to provide the neighborhood children with exposure to a language at a young age. At our local school, language learning begins in grade 7. This camp was also my first step towards more lengthy programs in the community. It gave me a chance to see how it would go, given the small venue of my great room and basement "kidzone" for the games.

Sunny Earth Camp provided me with many learning opportunities and as always, I learned more from my mistakes than from the successes. For example, having a wide multi-age group of children can be challenging! We had children ages 2-8. For the most part this worked, but I quickly realized that the 2-3 year olds would sometimes need a parent to stay and participate with them. Also, I learned that my own children, even though they are within the age range, did not always behave like perfect angels and sometimes needed daddy to step in to help. It is true that my children are more advanced than any of the other camp participants and I must remember that. They may be the same age as the others, but they understand French well as I have been speaking it to them since birth. The best lessons for them were when they could help me teach or act as a peer leader of the group...what fun that was!!! 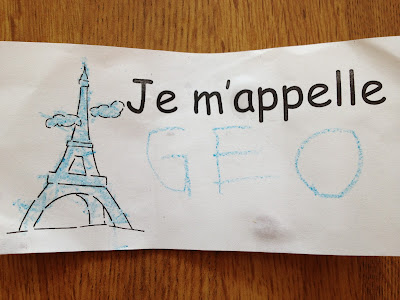 None of this is really that surprising. Despite any bumps along the way, the experience was positive for all. My children enjoyed being able to excel and help teach the other children. They also thought it was super cool to have so many fun kids over at the house at the same time! They were always excited when they learned we would be hosing another camp. That is a good thing as my ultimate goal, other than the joy of teaching young children, was to help boost my children's desire to learn and speak French. I think that Sunny Earth Camp definitely helped! I am so thankful to the many parents who chose to bring their children to join us this summer! MERCI!!!!!! 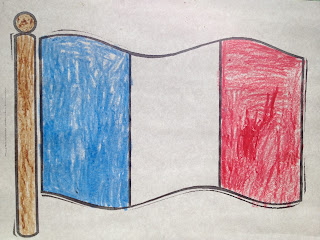 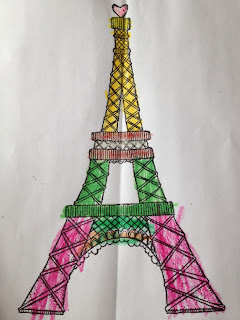 I used this AIM Language Learning Kit as a resource (scroll down in link to see samples of videos we used) along with a variety of fun videos, songs and active games. To read more about AIM, check out my AIM google doc. However, to fully implement AIM, I need to set up future programs to include more than just a few hour-long sessions in the summer! I cannot wait to make this dream come a reality! I am already speaking to community organizations to see where the best venue would be.

As everyone was arriving at camp, learners would gather around the table for the first few minutes to color and decorate name tags and/or other various coloring sheets. There were cultural coloring sheets and French alphabet books and other fun take-home activities at the table for children to choose from...but usually, I'd limit the sheets to what we were working on that day. For instance, if we were learning our fun "Girls and Boys" song by Melanie Cody, then I'd ask the children to color the picture for their gender. 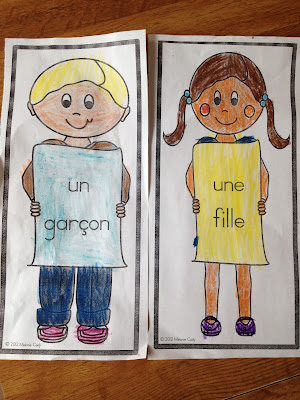 Once everyone arrived and had a few minutes to color, my daughter would help me sing the "Assieds-toi" song by +Ann Chiasson.  I added a "viens ici" section first, to bring the children over to the carpet in the great room, then we sat with an "assieds-toi" verse. (I've been told by a couple parents on different occasions, that their child has been "caught" singing this "Assieds-toi" song!)
On the "Boy/Girl" day, after we were settled at the carpet, the children really enjoyed singing and doing the actions to the very active Boy/Girl song! First it says "Girls stand up, girls dance the twist, girls do a spin...girls sit down." Then it's the boys turn "Boys stand up, boys jump up high, boys run really fast, boys sit down." After singing and acting out the song, we'd then play around with the words for boy and girl, learning the AIM gestures and practicing our pronunciation and pairing them with the proper person for their gender. Here's my expert helper a morning before a camp:

The learners thought it was the absolute most hilarious thing when they would purposefully call and girl a boy and vice versa...this hilarity stemmed from my daughter, I'm sure! The giggles were unstoppable! :)


From the AIM kit (a 50 hour unit of instruction), we used this "Bonjour mes amis" song along with the "Au revoir" song. I also pulled from various methods used in AIM.

After our welcome song, we would take a few moments to learn how to ask and answer the question: What is your name? We sang a little song with the names. Before we moved on, everyone was given the opportunity to ask and answer this important question! We then moved on to "How are you?" Of course there was a lot of acting out the different responses! Here is my helper reading her first French words to the class:

We would then usually take a "brain break" to watch a fun video. Here's one example of a video created by +Sylvia Duckworth  :

We often would play the "Am Stram Gram" game I made up that combines to different children's games...one French, one American. Am Stram Gram is a choosing rhyme, kind of like Eeny, Meeny, Miny, Moe. This French rhyme is great for learning the French sounds, but doesn't mean anything. I combined the rhyme with "One Potato, Two Potato" or "Bubble Gum" and the kids really enjoyed being the one to do the "choosing." They never wanted to stop until everyone had their turn! I was able to stop saying the rhyme with them after a couple times, too.

Other "brain breaks" included were 5-a-day dancing routines which helps the children learn directions and other command forms in a fun kinesthetic context:


We also had some other kinesthetic fun with Jeanne de la Lune's Robots by +nathalie bonneau. The children really enjoyed learning these high-frequency verbs TPR style:

In between all these active songs and actions, we would use the language in context and/or use it to play games. For instance, after learning the numbers, we went downstairs to the "kidzone" in the basement. I had a couple balloons down there that we used to play a number game the I found from this blog post by Spanish Playground. The kids used their numbers in sequence to count the balloon hits. They really enjoyed that game!

At our last camp, we made crêpes! Many of the children had never had them. They all enjoyed them with nutella, despite the other healthier choices...some added some peanut butter to the mix and one, yes, just one, tried a crêpe with apple pie filling. Many asked for seconds and a couple even asked for thirds!!!

For more videos from our camps, check out this YouTube playlist.

Here's some parent feedback from the camp:
"My daughter absolutely loved French Camp this summer. She was excited to learn new words and when she came home she may have "forgotten" what she did when asked, but she'd be singing the songs and counting to her sister when they played. Overall, I think it was a positive experience for her and her little sister is excited to do it next year!"

Here's feedback from a Thank You card:
"Thank you for inviting my daughter to Sunny Earth Camp. She enjoyed her time with you. Your passion is contagious, and the incluence you have had on my daughter is terrific. Thanks again."

Sunny Earth Camp was really fun...I'm looking forward to future camps and events of this nature and I know the kids are, too! That makes it all worthwhile!! Woohoo! Life is an adventure in learning!

What are some of your favorite language adventures? I'd love to hear!!!

Thanks for reading! :o)

P.S.
Here's my sample flyer for what will hopefully be coming soon to my neighborhood: 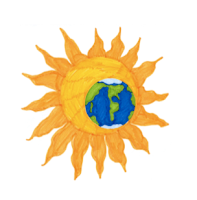 In order to accelerate learners French abilities, I will use the Accelerative Integrative Method (AIM) for language learning. Instruction is provided almost entirely in the target language. AIM provides an arts and literacy-based approach to language learning. The program incorporates stories, drama, music and dance into the learning, which helps children become emotionally engaged in language learning. Active fun will be the fuel that drives the learning process. On the last day of the camp, the little linguists will perform and present what they’ve learned to their families and friends: “La Poule Maboule” play, entirely in French!!!

Purpose: This language camp will provide children with the ability to communicate using basic French. Videos of short segments of each lesson will be uploaded to YouTube for campers to review at home (parental consent required). If families go the extra mile at home using our uploaded lesson videos along with other AIM supplies and resources compiled by Sunny Earth Academy, “campers” and their families may continue their learning outside of camp hours and teach others in their family.