Yesterday was a magical day in my AIM-world! It was the first time we used the paper puppets. I honestly did not think it was going to be earth shattering...but boy, was I wrong! The students volunteered to come up in front of the room and hold the puppets. They moved them around to act out the play as we practiced saying it together, with my gestural support. 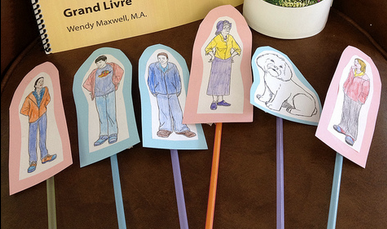 The students really got into it and made their puppets act in such a funny way....it was it hilarious! First, before we started, they asked me why the dog puppet was so enormous. The play calls him a "petit chien" but really, they're right, the puppet is enormous in relation to the people. We had learned the word "dinosaure" for one of the hats we used in a previous lesson, and one of the kids said something like "Yes, the 'little dog' is like a dinosaur." I am always amazed when students ask me questions in the target language. They are not always perfect, but after just 6 weeks of French, they are comfortable enough to create questions on their own about things that we have not really talked about before in class. It is so cool! Thank you, AIM!!!!

As we started acting out the play with the puppets, I realized I was missing some props. I was missing a bag for Henri to hide the dog in, for instance. I grabbed the closest thing I could find to give to the student holding the puppet for Henri. It was the wolf puppet, which when turned upside down, actually did work like a bag. The kids really got a huge kick out of using the wolf as a bag...I think it's one of those things  you'd have to see to truly understand just how funny it was...it seems there's a bit of this happening in my classroom as I said something similar in last week's blog post. At any rate, the students really blew me away with this puppet activity. Everyone was reciting the play even faster than I could gesture...and laughing all the while as some of them moved the puppets around in funny ways to match the words. What a great way to start our lesson!

After our first attempt with "Put the words in order" (which they picked up on really fast), we played a review game. I had told them in the beginning of class: "If you work really well and really hard in class today, we can play a game at the end." Well, actually I was gesturing it and they spoke it for me...there is rarely a moment when the class is not speaking out loud in an AIM classroom...one of the many reasons that AIM truly is an "Accelerative" method!

Playing this game was one of those moments where you just love life, love your job, your students and you are extremely sad that the bell is going to ring and end it. I have to admit, though, that I am getting this sort of positively-good feeling about teaching more and more now with AIM than ever before. Watching my learners grow like never before is such a wonderful experience for all. They are doing so great and I simply cannot wait to see how far we make it in one year. I know they are feeling good, too...I can see it in their faces and eyes when we take a moment to talk about everything we know so far!

So back to the game...here's my quick AIM Forum description of the activity, along with the link to download the game. Please note that I used this template created by Arik Durfee. Arik, if you ever read this, THANK YOU! This was a hilarious, engaging review game. The amount of giggles and belly laughs was more than I've ever heard in my classroom! Here's some screen shots: 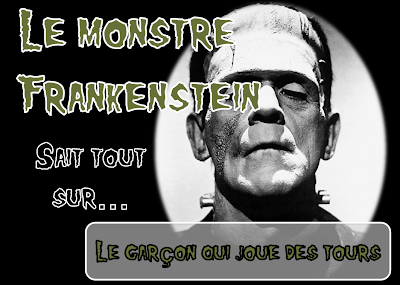 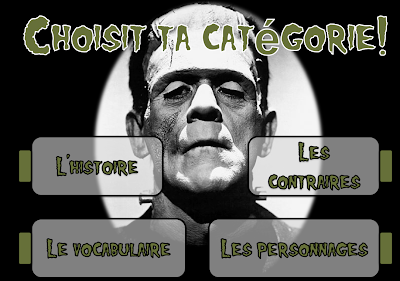 The part they loved the most was the random bonus rounds that kept popping up here and there. They would have to read the clue, that would pop up after the message you see in the picture below. It told them to do things like:
1. Stand up and dance Gangnam/French months Macarena/Le twist/etc.
2. Stand up and jump three times really quick
3. Come up to the smartboard and touch Frankenstein's head

I'd love to hear your ideas for more bonus rounds! If you think of anything, please let me know. The bonus part, I feel, was what kept them on their toes and it also made the game even more fun and unpredictable. They just never knew when the bonus would pop up and they were all on alert for it. I was amazed at how fast they were able to read and comprehend and then act out the request. 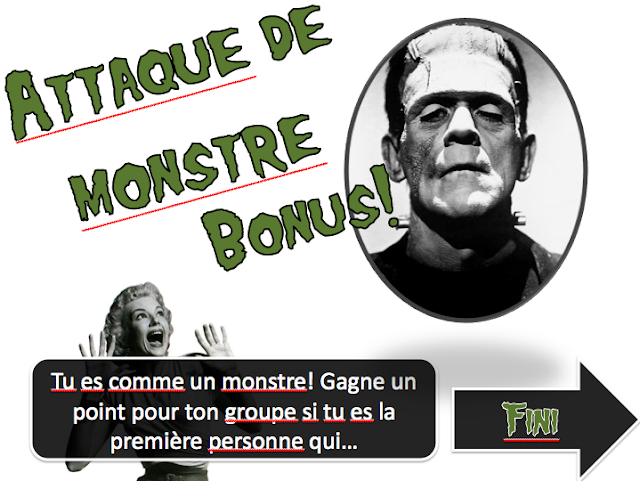 Later in the day yesterday, the Peace through Language club and I were able to volunteer in a first grade classroom. We did AIM's hat lesson that I mentioned earlier. The kids really love this lesson...whether they are first graders or middle schoolers! I think I have collected over 20 hats now. I need to update my picture, but here's some of them: 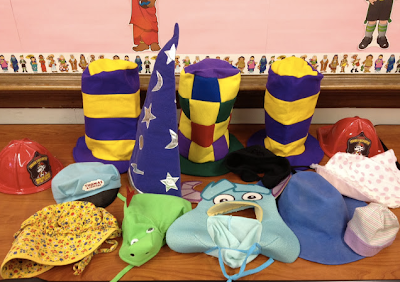 So basically, this activity teaches the little linguists about counting in context, the opposite verbs of "put on" and "take off" and the verb "fall" once again, in context. The lesson is just plain, good fun! By the end, there are students all over the place putting on and taking off hats and then they give them all to me. Once I have them all back, I stack them on my head, one at a time saying: "I'm putting on one hat now...Now I'm putting on two hats...etc. They get piled up so high that they start to fall. This caused quite a uproar in giggles with these little ones! AIM has you pre-teach the verb for fall so the students are hearing it again in the same day. The giggles that this activity got were the perfect opportunity to teach the verb "to laugh" so of course we learned that, too. We reviewed the expression, "Ça, c'est fou" as well! (That's crazy!)

There was a birthday in the first grade class this week, so we moved to the smartboard for some birthday fun with this symbaloo I created called "Joyeux Anniversaire." It has birthday songs and other fun goodies for little French linguists...but middle schoolers seem to find it amusing, too! 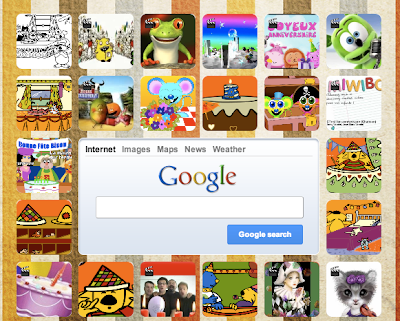 After singing "Bonne fête" and allowing the birthday boy to choose a link from the Birthday symbaloo, we decided to have a little Halloween fun. We used my other symbaloo: "C'est l'halloween" and we chose +Sylvia Duckworth's video of Matt Maxwell's song "C'est l'halloween." The children learned to sing the chorus and the parts with all the "oui, oui, oui's" and the "non, non, non's." Here's more about my Halloween symbaloo and here's what it looks like...you 'll have to scroll right to see everything:

We also used +nathalie bonneau's "Un costume pour Halloween" which is one of the symbaloo buttons, and one of my all time favorite French resources for Halloween. 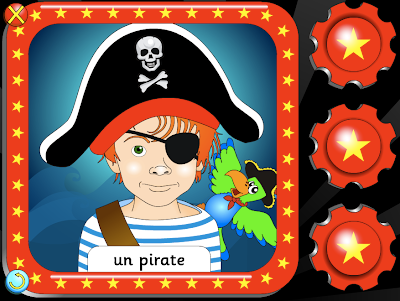 They loved touching the buttons on the smartboard and seeing the boy's costume change. I was able to ask them some total questions, AIM-style, like "Is this a boy or is this a girl?" and "Is the boy a ghost or is the boy a pirate?" We did this all in French, of course, with complete sentences for answers. The little ones are also doing so great with AIM!

All in all, it was simply an AIMazing day! With such a great start of the year, I honestly wasn't sure I'd be able to keep up the excitement in the classroom...but so far, so good!

Listening to the laughs and seeing all the smiles yesterday just reinforced my passion for AIM Language Learning. Not only was it fun for the learners, but they were speaking in full sentences (and reading as well for the middle schoolers) from bell to bell. It is music to my ears. It makes my heart sing. I even hear from parents on a regular basis that their children come home speaking and singing in French...it doesn't get any better than that!