Written October 19th: At a birthday party today, my six-year-old daughter started teaching some French to one of the other kids there. One of the adults was asking her to share some of the French she knew and then she opted to begin teaching one of the children some simple phrases and vocabulary. I didn't witness this, but the adults came to tell me. In fact, the parent of the child being taught was the one who happily reported it.

November 6, 2013
Tonight during our bedtime ritual, there were two precious moments that I wish I could bottle up and relive down the road when the kids grow up. First, after my daughter read her English book from school, she asked if she could read one of the French books we had chosen. It was this adorable book called "Bonne nuit, je t'aime" by Caroline Church: 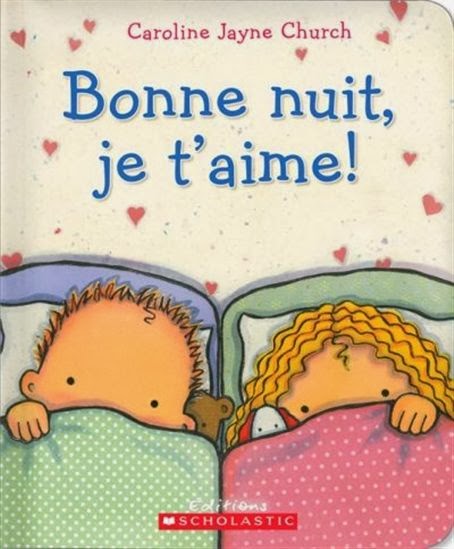 This is a very familiar book, however, it has several very difficult words. Nevertheless, she insisted she must read it, and with some help, she got through it! It definitely helped that we have read it dozens of times!

Secondly, tonight my 4-year-old son had a major break through. He joined me in singing this French lullaby that I've been singing to him for over half a year now. In this video, you will hear my daughter's voice, not my son's...perhaps he will let me record him singing with me sometime soon?!

This wouldn't really be a break through except that my son has gone through a lot in terms of his hearing and has even gone through phases where he didn't want lullabies. He was very sensitive to the sounds of singing. But lately he has been allowing me and requesting that I sing him lullabies. He hasn't ever really sung a lullaby with me before, so to hear him utter those words with me in song was incredibly touching. The fact that it was in the language he rarely produces was simply amazing.